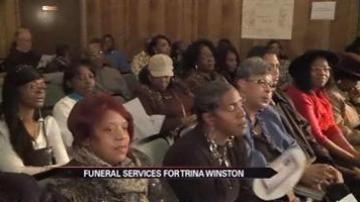 SOUTH BEND, Ind. -- Tarrence Lee has been in court this week for allegedly killing his wife Trina Winston.

Winston went missing in August. Her body was found last month in Chicago.

Family and friends finally got to say goodbye in a ceremony at Saint Paul Bethel Church in South Bend.

It was a full house at the church as hundreds of friends and family gathered to celebrate the life of Trina Winston.

"We had smile. We had laughter. We have a lot of memories," said Weaver.

Winston's brother and sister said it was bittersweet for them.

"I am happy about finding her and being able to give her a homecoming celebration, but then I am sad because we still have other issues that we have to deal with," said Sheila Winston-Redding.

Those issues have to deal with Trina Winston's estranged husband Tarrence Lee, who is currently on trial for allegedly murdering Winston. The family said his behavior in court this week has been upsetting.

"We can see right through him,” said Redding. “He is trying to laugh and stuff with his lawyer.

But the family is confident Lee will be put behind bars for good this time, for allegedly killing Winston.

"They don't have a choice, it is guilty,” said Redding. “He has already said it is guilty.”

They say there is one thing that no one can take away from them, the memory of their sister's smile.

The judge is set to rule on the Lee trial this Wednesday.