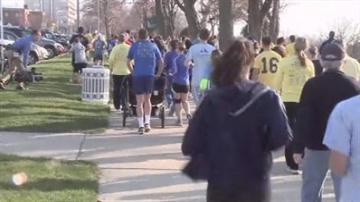 ST. JOSEPH, Mich. -- People all across the country laced up their tennis shoes to take part in memorial runs to honor the victims of the Boston Marathon bombings, including right here in Michiana.

More than 300 people came out to show their support for the victims of the Boston Marathon bombings, including two local runners who safely crossed the finish line in Boston just one week ago.

"It’s absolutely shocking and humbling," says Jessica Stauffer. "You want to be joyful that everyone has come together, but unfortunately it is around the circumstances that it is."

Stauffer, the founder and director of the local runners club Sunset Coast Striders, decided to join the Boston strong movement and do what they know how to do -- run.

It's a surreal thought for a few who ran the Boston Marathon just one week ago.

"If anything this made me more excited to run and have a bigger love of the sport, because I hope to return to Boston," says Lisa Altman.

Altman and fellow runner Michael O’Hern finished the race and were just getting back to their hotel when they heard the explosions on the streets below.

As dozens of victims work through their recovery, local runners say they will be cheering them on all the way to the finish line.

"The people of Southwest Michigan and especially my family are, well we are really pulling for them [the victims]," says Kallay Carr.

During the memorial run, several donations were received for one fund Boston, the main fund supporting victims of the tragedy. The run raised nearly $600 for the victims and their families.