Hundreds of laid off AM General workers called back to work 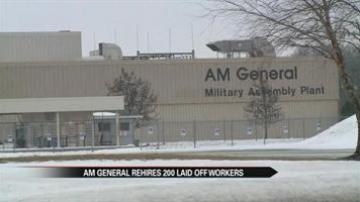 MISHAWAKA, Ind.-- AM General is hiring back 200 workers who were laid off last year.

Some workers have received calls from AM General asking them to come back to work this week.

The Executive Director of Communications and Marketing said they hope to have 200 workers back in the commercial and military plants by February.

Jeff Adams said, “This is in response to a previously planned foreign military order of HMMWVs for the military assembly plant and the restart of production operations for the commercial MV-1 vehicle.”

Adams said workers will be hired back under the terms of their labor agreements.

ABC57 talked to one laid off worker Saturday who has been without a job since January of 2013.

The worker who wanted to remain anonymous said their unemployment benefits are running out.

The bargaining chairman with the United Auto Workers Union says this will make 2014 a little brighter for workers who have been unemployed for over a year.

Schweizer says the second round of workers recalled will make the first factory-made wheelchair accessible MV-1s in the world.