Hundreds of people in Michiana rally for immigration reform 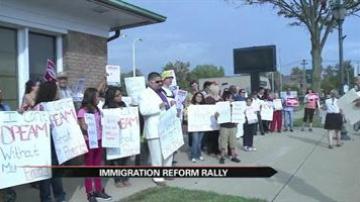 MISHAWAKA, Ind. -- People are not waiting for the government shutdown to end to let their voices be heard in Michiana. They want immigration reform and they want Congresswoman Walorski to know the strong and passionate opinions of her constituents.

Friday, people gathered at Beutter Park and marched to Congresswoman Walorski’s office to express how much this bill means to them.

People of all ages, all races, came together to rally for one common cause.

Walorski was in Washington DC, but Flora spoke with people from her staff.

He and others rallying are urging Walorski and the house to pass immigration reform to help millions of families.

"They are part of America it is time to bring everybody together and fix this broken immigration system," expressed Flora.

The bill is halfway there, it now must get through the house and republicans like Walorski.

Flora has a messages for those who hold the power to vote on this bill, "You are a member of the house, if you have issues bring, them up on the floor, but most of all lets see if we can get this voted on and move forward."

There was another rally held in Plymouth on Saturday.

These local rallies are part of a national movement, thousands were expected to rally in favor of immigration reform this weekend.