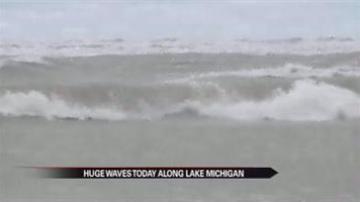 PORTER COUNTY, Ind. -- The winds from Sandy created quite a mess at the Indiana Dunes. Crews at the state park worked overnight to make it safe to reopen on Tuesday.

Hundreds of people showed up at the Indiana Dunes State Park to get a look at something they may never see again.

"I'm a financial advisor and the markets are closed so I thought I would come out and take a chance on a once in a lifetime opportunity,” said Dave Wagner of Chicago.

The high winds and promises of massive waves were enough to bring people in from as far away as Fort Wayne.

"It's very impressive. The wind is very fierce and the waves are huge, and it's difficult to stand out there because of the sand is blowing so hard. But as long as you can last, it's pretty amazing,” said Rich Lee of Fort Wayne.

In the late afternoon, the temperature felt like 35 degrees and sustained winds were 30 miles per hour.

The bad weather was no deterrent to Josh Fogus who came to take pictures of the lake during the storm.

"I've just started recently getting into photo editing and taking pictures so, it's kind of a good time to start,” said Fogus.

"I feel like even pictures don't do justice for what you know you are seeing here,” said Tabitha Jordan.