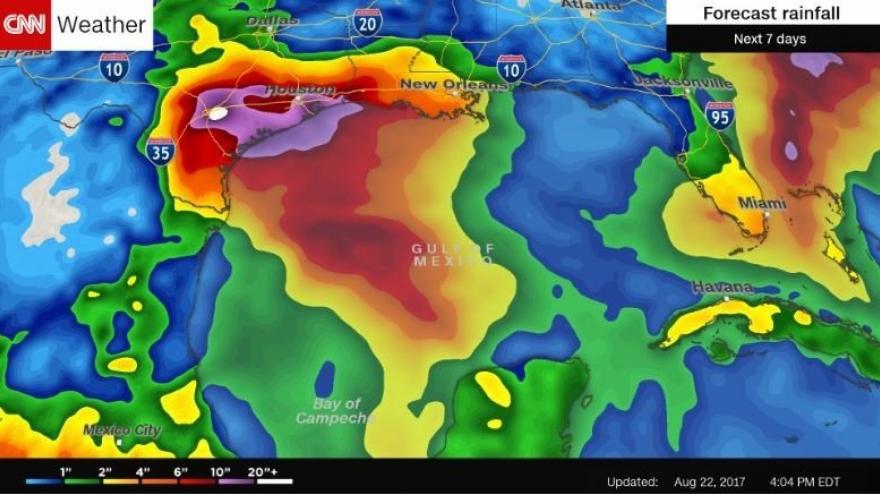 (CNN) -- As Hurricane Harvey gains strength, residents along the Texas coast aren't taking any chances; they're filling sandbags, stocking up on water and boarding up windows.

Port Aransas on Mustang Island and nearby Portland issued mandatory evacuation orders. Houston, meanwhile, has canceled the first day of school on Monday.

Harvey is rapidly strengthening and is forecast to become a Category 3 hurricane with winds of at least 111 mph by the time it hits the middle Texas coast late Friday or early Saturday, the hurricane center said Thursday. After hitting Corpus Christi, the storm is expected to stall over the state, forecasters say.

At 8 p.m. ET, Harvey was a Category 1 hurricane with 85 mph winds. It was about 275 miles southeast of Corpus Christi, and was moving north-northwest at 10 mph.

Compounding potential problems is the tidal cycle. If peak storm surge arrives during high tide, parts of the coast could see 2 to 8 feet of flooding, with the potential of 6 to 12 feet between Padre Island National Seashore and Sargent, Texas.

Students and staff at the Texas A&M branch campus at Corpus Christi are under a mandatory evacuation order. The campus will be closed starting Thursday, according to the university's website.

People around Corpus Christi started stocking up Wednesday on food, bottled water and other essentials.

Others in South Texas readied sandbags, fueled up power generators and bought plywood to board up their windows, CNN affiliate KRIS reported.