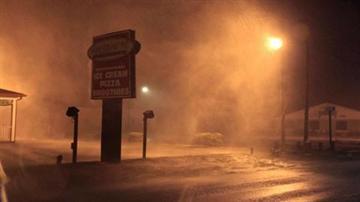 When it rains, it pours, for the Curtis family of Carolina Beach, N.C., who welcomed the arrival of a new addition, all while the eye of Hurricane Irene watched over.

"I fully expected that delivering a baby in August meant it would be hot and muggy," said new mother, Andi Curtis. "But I never thought hurricane would be an issue."

Andi and Jeff Curtis were admitted to New Hanover Regional Medical Center in Wilmington, N.C., Friday evening and welcomed daughter Parker Elizabeth during the height of the storm.

"I could see out the window but honestly I really wasn't paying attention during labor and delivery," said Andi Curtis.

New Hanover Regional Medical Center reported a dozen new babies within the near 17-hour lockdown of the hospital, and eight mothers in waiting. Now that the lockdown is lifted, the hospital expects several more soon-to-be mothers to rush in.

The hospital delivers about 4,000 babies a year. But according to Martha Harlan, a spokeswoman for New Hanover Regional Medical Center, the 12 so-called hurricane baby deliveries within their lockdown period suggests a 30 percent spike.

In fact, some experts say the weather could be to blame for some mothers who go into labor unexpectedly.

"Everybody kept telling me about barometric pressure," Curtis said. "But I just kept thinking the storm isn't going to make my child come."

And the weather may not only bring on a new bundle of joy. Some evidence suggests that natural disasters could be the basis of why some couples will soon find themselves expecting.

Fertility rates seem to rise during less severe storms in areas that are used to experiencing natural disasters, according to a 2010 report published in the Journal of Population Economics. But highly severe weather advisories don't seem to boost fertility, according to the report.

So will the hurricane inspire a new wave of Irenes to walk the earth?

The Curtises never planned on it.

"We will document her coming in a hurricane in other ways, like newspaper clippings," Curtis said. "We'll definitely remember it."

Harlan said only two of the couples at the hospital seemed to be considering the name Irene, but just as a middle name.