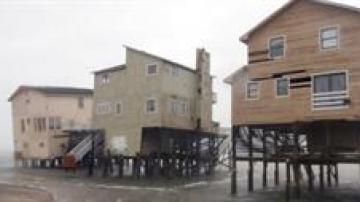 Hurricane Irene weakened slightly as it continued its destructive march up the East Coast Saturday, leaving fallen trees, collapsed roofs, and at least five people dead in its wake.

Irene's whipping winds slowed slightly, from a maximum of 115 mph to 80 mph, though the enormous storm continued to crawl north and east at 13 mph as it began its assault on New Jersey this evening.

More than 1 million residents and visitors of the Jersey Shore have been evacuated, though a stubborn 600 individuals, many of whom are senior citizens, remain in high rise buildings on a barrier island in Atlantic City, according to New Jersey Gov. Chris Christie. Winds can get up to 75 mph at the upper floors of some of the buildings, Christie said.

On top of the hurricane fears, tornado watches are in effect for much of the shore and inland areas in New Jersey, including Monmouth, Ocean and Middlesex Counties.

New York City continued to prepare for a direct hit by Irene tonight, with more than 30,000 available cots at shelters throughout the city. Only about 1,400 people had arrived at the shelters this evening, according to ABC station WABC-TV in New York.

When asked about safety and potential looting in the city, Mayor Mike Bloomberg said he is not worried.

"This is New York," Bloomberg told WABC. "We don't have that sort of thing."

Residents in the New York area can expect gusts of 30-40 mph until about 4 a.m. Sunday, with wind speed then picking up until about 11 a.m., when it will reach about 75 mph.

Nearly 10,000 flights have been canceled around the country, as airports in Irene's path have completely shut down operations.

Emergency personnel and National Guardsmen are being called up by officials in East Coast states as the storm continues north, leaving flooding, destruction and even death in its wake.

As five deaths were reported across North Carolina and Virginia and close to 1 million customers in coastal states lost power this afternoon, the leaders of New York, New Jersey and Pennsylvania prepared their states for Irene's next wallop.

New York Gov. Andrew Cuomo doubled the number of National Guard troops that will be deployed to Long Island, New York City, and the Hudson Valley area to help with the storm. Troops will help staff shelters, control evacuation routes, monitor flood threats at the World Trade Center site and work with the MTA to secure railways and train tunnels.

In New Jersey, Christie spoke bluntly about the need for people to get out of the storm's path.

Pennsylvania Gov. Tom Corbett said he feared residents were not preparing enough for the expected 6-10 inches of rain that could come with the storm.

"I need to stress that when it stops raining, doesn't mean that it will stop flooding," he said, noting that residents can expect flooding and extensive power outages.

Public transportation in all three states has been stopped for the duration of the storm; in New York City, Bloomberg said today that he didn't expect the subways to resume running until sometime on Monday.

Defense Secretary Leon Panetta has issued a prepare-to-deploy order for 6,500 active duty troops from all the services to support hurricane relief efforts if necessary.