Hurricane Irma weakens as it spins north with wind, rain 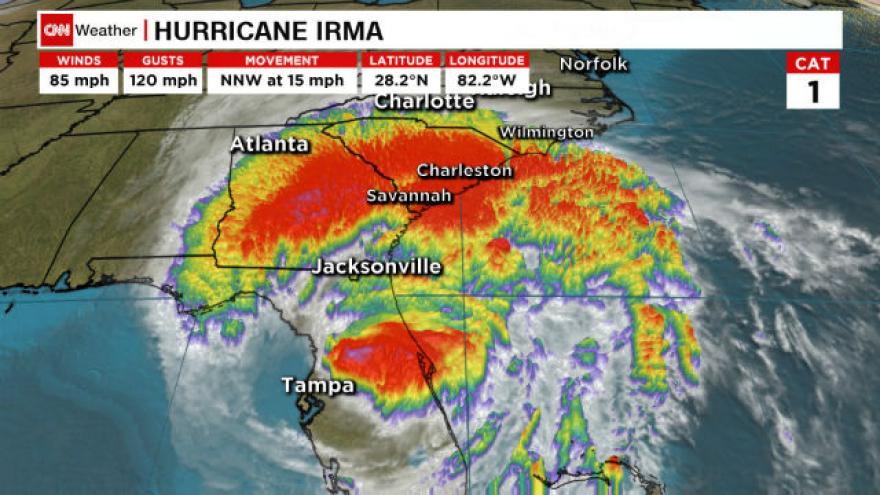 (CNN) --Hurricane Irma weakened to a Category 1 storm early Monday after it roared through southwest Florida and left nearly 4 million customers without power.

Irma was downgraded as it moved over the western Florida peninsula, the National Hurricane Center said. By 2 a.m. ET, it had sustained winds of 85 mph with its center 25 miles northeast of Tampa.

Despite its weakening as it passes over land, Irma's strong winds and flooding are a major risk, forecasters warned.

The hurricane hit southwest Florida on Sunday, downing power lines, uprooting trees and turning streets into rivers. It battered Florida's lower half, leaving a trail of tornadoes and storm-surge flooding as its core slowly moved inland.

The massive storm triggered evacuation orders for 5.6 million people before it made two landfalls in the state Sunday.

The first one was over the Florida Keys, which Irma hit as a Category 4 hurricane. The second one, in Marco Island, left the island without water and power, authorities said.

-- One person was found dead in Orange County in a single-car accident related to the storm, police said without providing details.

-- Strong winds and flash flooding are still a threat as Irma spins into north Florida and toward Georgia over the next 24 hours.

-- Irma's center will move over the western Florida peninsula through Monday morning and into the southeastern United States late Monday and Tuesday, according to the National Hurricane Center.

-- Strong winds blowing from the northeast pushed water out of shallow parts of bays and harbors in cities like Tampa and Port Charlotte.

"As soon as the wind shifts direction, the water will come back quickly and continue to move inland," CNN meteorologist Judson Jones said.

-- Two tornadoes touched down in Brevard County, Florida, destroying mobile homes in their path, officials said. No injuries have been reported.

-- Nearly 4 million electric customers are without power across Florida, according to utility companies.

-- At least 26 deaths have been blamed on Irma in the Caribbean islands, where it hit before barreling toward Florida.

In Miami-Dade County, police said they arrested 28 people for burglary and looting.

'You can't survive these storm surges'

Other states may be affected

Irma hit Cuba's Ciego de Avila province late Friday as a Category 5 hurricane before it weakened and headed to the United States.