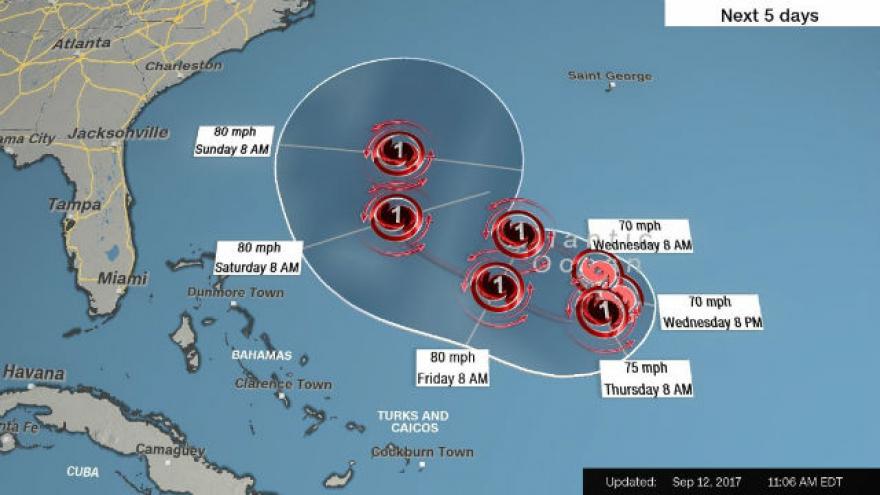 Hurricane Jose was 700 miles east of Florida at midday Tuesday, September 12, 2017, with maximum sustained winds of 75 mph, making it a Category 1 storm on the Saffir-Simpson Hurricane Scale. Photo courtesy CNN

Hurricane Jose was 840 miles east of Florida early Wednesday, with maximum sustained winds of 75 mph, making it a Category 1 storm.

"Jose looping over the southwest Atlantic between the Bahamas and Bermuda," the National Hurricane Center said.

The storm is expected to remain at hurricane intensity in the Western Atlantic, and it could strengthen as it takes an odd, looping path that may bring it near the Bahamas and the United States this weekend.

However, most computer models indicate Jose will stay out to sea and complete a tight enough loop to avoid moving onshore.

Jose's impact is sure to be felt along the Southeast coast, bringing rough seas.

Such a path is concerning in the wake of Hurricane Irma, which has altered the beach landscape and made it more vulnerable to coastal erosion and flooding.

The track for Hurricane Jose is a strange one.

In a pocket of weak steering winds in the open Atlantic, Jose is expected to make a clockwise loop. It will initially move farther away from the United States before coming closer to the Bahamas and East Coast.

-- GFS, the American forecast model, and the ECMWF, the European one -- keep Jose over the ocean.

But models can have trouble forecasting unusual tracks such as Jose's expected path. There is generally not a dominant weather feature that is steering the storm, so model forecasts can vary widely between each other and from run to run.

The National Hurricane Center recognizes this uncertainty in its Tuesday morning forecasts for Jose, saying "after (three days), the confidence in the forecast decreases as the guidance diverges significantly."

The center's official forecast finds Jose just over 400 miles from Jacksonville, Florida on Sunday morning. Still, the cone of uncertainty comes uncomfortably close, within 200 miles of Florida and 50 miles from the Bahamas.

The storm may bring a high risk of rip currents, too.

Jose already has threatened other hurricane-weary countries. As a much stronger Category 4 storm, the hurricane passed only 85 miles from the island nation of Antigua and Barbuda last weekend.

Tropical storm-force winds from Jose spread over the islands on Saturday. Only three days earlier, Antigua and Barbuda had been devastated by a peak-strength Category 5 Irma, packing 185-mph winds.

Before this hurricane season, the United States had gone a record 12 years without a major hurricane landfall. But with Harvey and Irma, it has now experienced two Category 4 landfalls in 16 days.

In May, the National Oceanic and Atmospheric Administration said that unseasonably warm ocean temperatures and a no-show from El Niño would contribute to a potentially "extremely active" hurricane season.

There have already been six named hurricanes this season: Franklin, Gert, Harvey, Irma, Jose and Katia. If history is a guide, more will be on the way.

The full hurricane season lasts until November 30, although the peak season generally stretches from about mid-August to mid-October. But hurricanes into November and even December are not unheard of. Last year, Hurricane Otto formed on November 20 and made landfall in Nicaragua as a Category 2 storm.