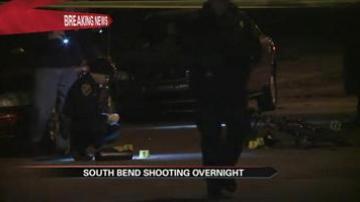 SOUTH BEND, Ind. -- A man was murdered while riding his bike in South Bend early Wednesday morning. It happened around 12:45 a.m. on the 1400 block of Adams Street on the city's northwest side.

Officers were alerted to the gunshot being fired by the ShotSpotter technology.

Police arrived within minutes of when the shooting alert was issued.

Police found the victim, his bicycle and 9mm rounds lying in the middle of the street.

18-year-old Nathan Hall had been shot in the head. He was rushed to Memorial Hospital and was pronounced dead on arrival.

Clay High School has just learned that Nathaniel Hall is the latest victim of an act of senseless violence. Nate was a senior with a jovial personality loved by all. He was highly active in Clay athletics, participating in basketball, baseball, and tennis.  He was always positive and encouraged his teammates to do their best both on or off the court and field. He was on track to graduate with his class in June. Nate's good heart earned him the respect of peers and teachers alike. He will be dearly missed.

No suspects are in custody.

Metro Homicide is in charge of the investigation, they're asking for help in solving this case.

Authorities would like for anyone with information on this deadly shooting to please call Crime Stoppers at 288-STOP (7867) or St. Joseph County Metro Homicide Unit at 235-5009.