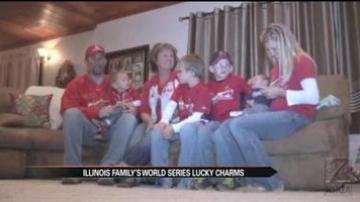 PERRY, Ill. -- An Illinois family thinks they might hold the key to another World Series victory for the Cards.

The Cardinals have won a World Series every year that a baby has been born in their family since 1982.

"When we got to the hospital, the doctor and my husband were about to have a fit, because the Cardinals were playing in the World Series and heaven forbid, they couldn't be in labor with me. So they had to get me going and luckily I had the baby before the ballgame that evening," said Sarah Lipcaman.

Their third son was born in 2011 when the Cardinals scored another World Series victory.

Their fourth son, Kase, was just born on October 9th.