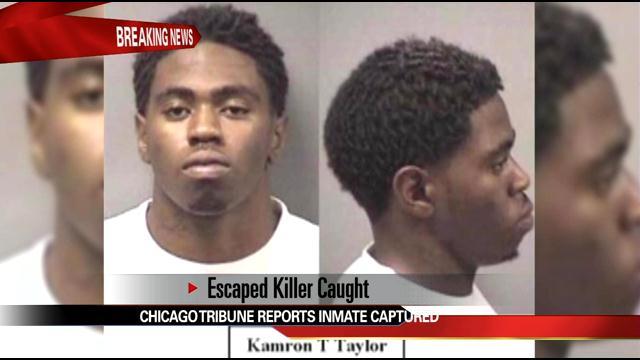 He wouldn't give his name. But the name tattooed on his neck -- Gertrude -- gave him away.

Authorities around Illinois had been looking for Taylor since early Wednesday, when he jumped a correctional officer at Kankakee's Jerome Combs Detention Center, then took off with the guard's uniform and SUV.

Surveillance video was the last officials saw of Taylor until just before midnight Friday, in Chicago.

"They saw a guy that matched the description," Bukowski said. "And if you're in law enforcement very long, you just get a feeling that something's not right. ... I think that's what happened."

The suspect ran five city blocks before being tracked down, carrying a loaded handgun. He didn't go easily, refusing to identify himself. But when Chicago police contacted their law enforcement counterparts about 60 miles south in Kankakee County and told them about the tattoo, it became clearer who the man was.

As Bukowski said of the Gertrude tattoo, "It's not a common name to have around your neck."

'He's not going to walk down the block again'

Fingerprints later confirmed that Chicago police had indeed caught up with Taylor. While not offering details beyond that no one is thought to have driven him north nor did a tipster call to specify his location, Bukowski did say "we have some ideas of where he went and how he ended up" in the Windy City.

It wasn't immediately known either when Taylor will return to Kankakee County. But, when he does, the sheriff said the convict will likely face an attempted murder charge for his attack of the jail guard on top of his already extensive criminal history.

Bukowski said he expects that Taylor will eventually be incarcerated outside Kankakee County, in part because "you don't want someone to raise" the idea that guards there might somehow seek retaliation for the attack on one of their own.

What the sheriff doesn't want is for Taylor to go free ever again. This is a man, after all, who killed a man in a June 2013 botched robbery, had to be wrestled to the ground by bailiffs after his conviction in late February, then escaped jail after assaulting the guard.

"He's not going to walk down the block again, I don't believe," Bukowski said.

Sheriff: 'Someone missed' inmate not being in cell

The assaulted correctional officer remains in an Illinois hospital, where his condition has improved and he's been able to talk to fellow authorities.

This qualifies as very good news, given that authorities think Taylor "believed that he had killed that correctional officer by strangling him" around 3 a.m. (4 a.m. ET) Wednesday, according to the sheriff.

The guard was making his rounds when he was attacked from the side, then severely beaten and choked. Taylor then allegedly disrobed the guard, a military veteran and 10-year employee of the corrections department. The guard was left on the jail floor, going in and out of consciousness, for about 35 minutes before authorities -- concerned because the guard hadn't responded to calls -- found him, the sheriff said.

The alleged attacker then walked out of the jail, albeit only after having his identity checked by camera after pushing a button to notify "master control" that he wanted to leave.

"We think that because he had the officer's uniform on," the sheriff explained this week, "that's how he was able to effectively escape."

Now that Taylor is once again locked up, the focus has shifted more to how he left in the first place. Opining that the escape wouldn't have occurred "if everybody had followed protocol," Bukowski said it's believed the inmate wasn't in his cell at lockdown.

"That's where the big mistake happened," the sheriff said. "Someone missed that. And from that point on, things broke down."