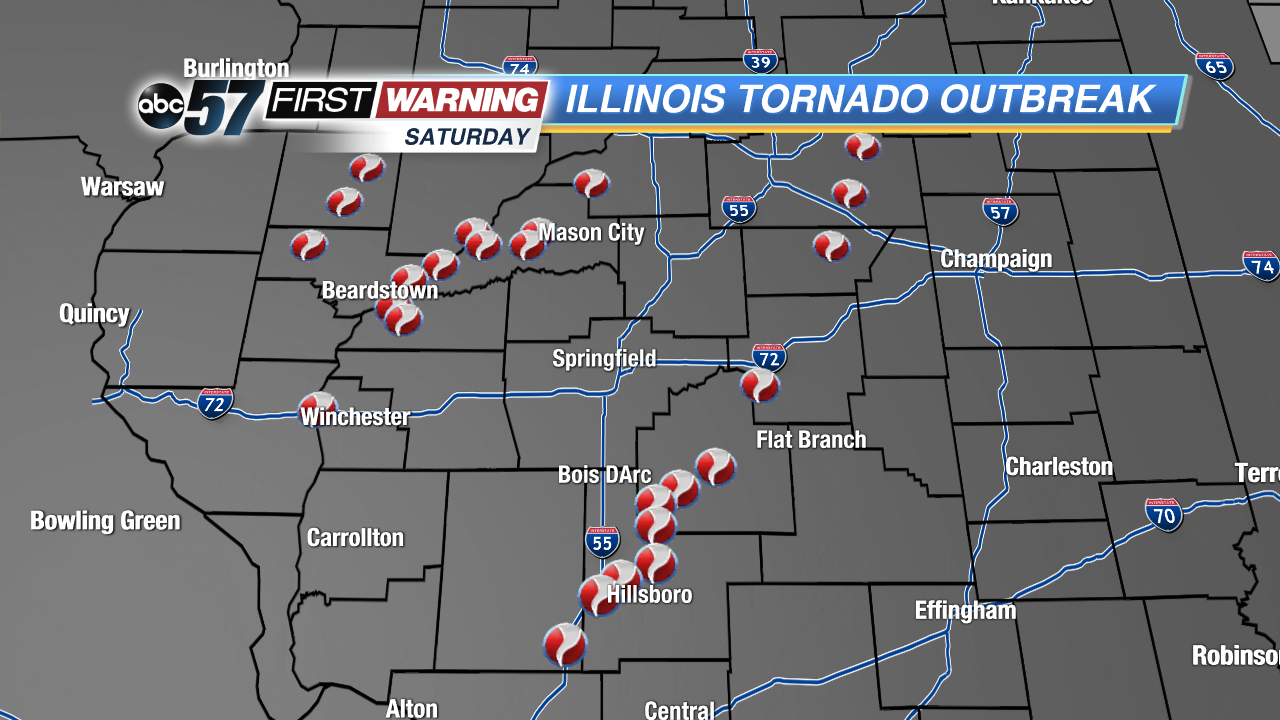 Reported tornadoes from December 1st. NWS/SPC
December came roaring in for parts of Illinois on Saturday. A record-setting, extremely rare tornado outbreak impacted the central portion of the state near cities like Springfield and Peoria. As of Monday afternoon, there were 22 confirmed tornadoes by National Weather Service survey teams. That number could still rise as additional surveys are completed. With the count already being at 22, Saturday's outbreak is now the largest in terms of number of tornadoes to ever strike the state in December. 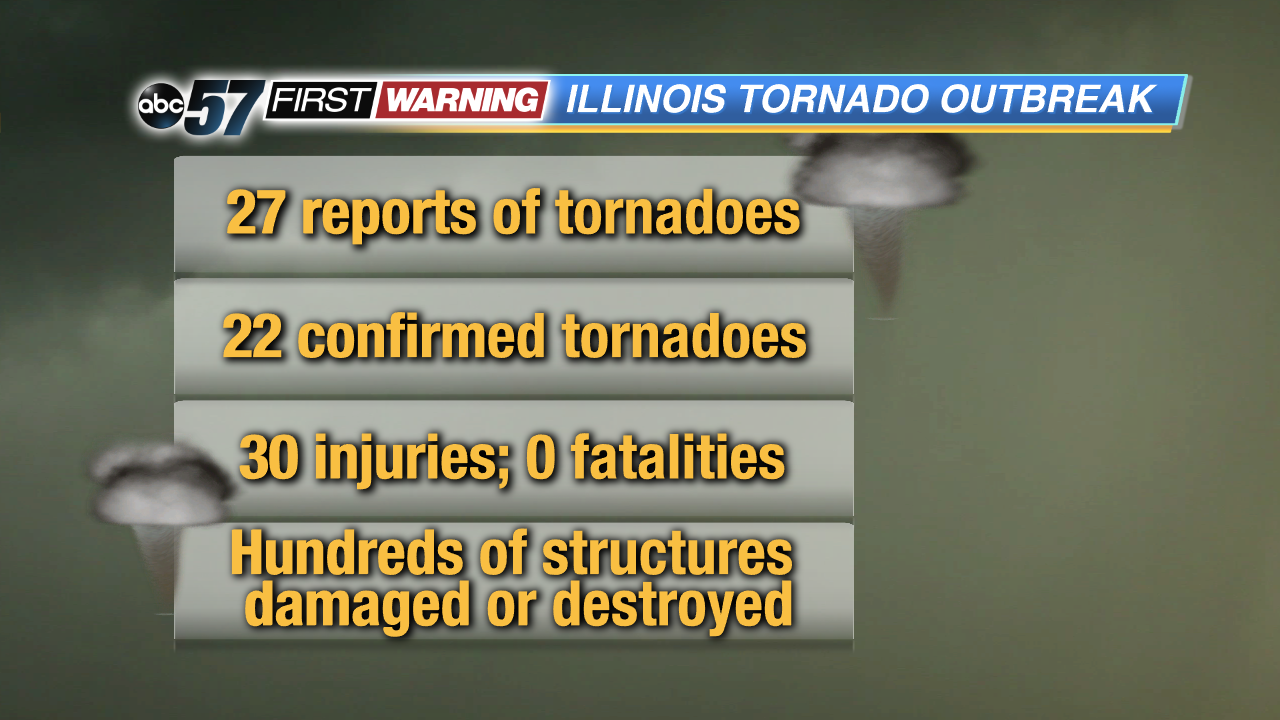 There were over two dozen injuries reported, most of which occurred in Taylorville. Located to the southeast of Springfield, Taylorville was the hardest hit with 100 structures either damaged or destroyed. Additional areas where tornadoes touched down include Beardstown, Forest City, Bluff City, and Havana, among others. No fatalities were reported in Illinois, but one person was killed by severe weather in Missouri on Friday night.

Tornadoes are not completely unheard of in December, but they are few and far between. That is especially true for Midwestern states like Illinois. The state averages less than one tornado every December according to NOAA's Storm Prediction Center. According to the climatological average, the United States as a whole only averages 24 twisters in the month of December, with states like Texas, Louisiana, Mississippi, Arkansas, Missouri, Florida, and Alabama leading the way. 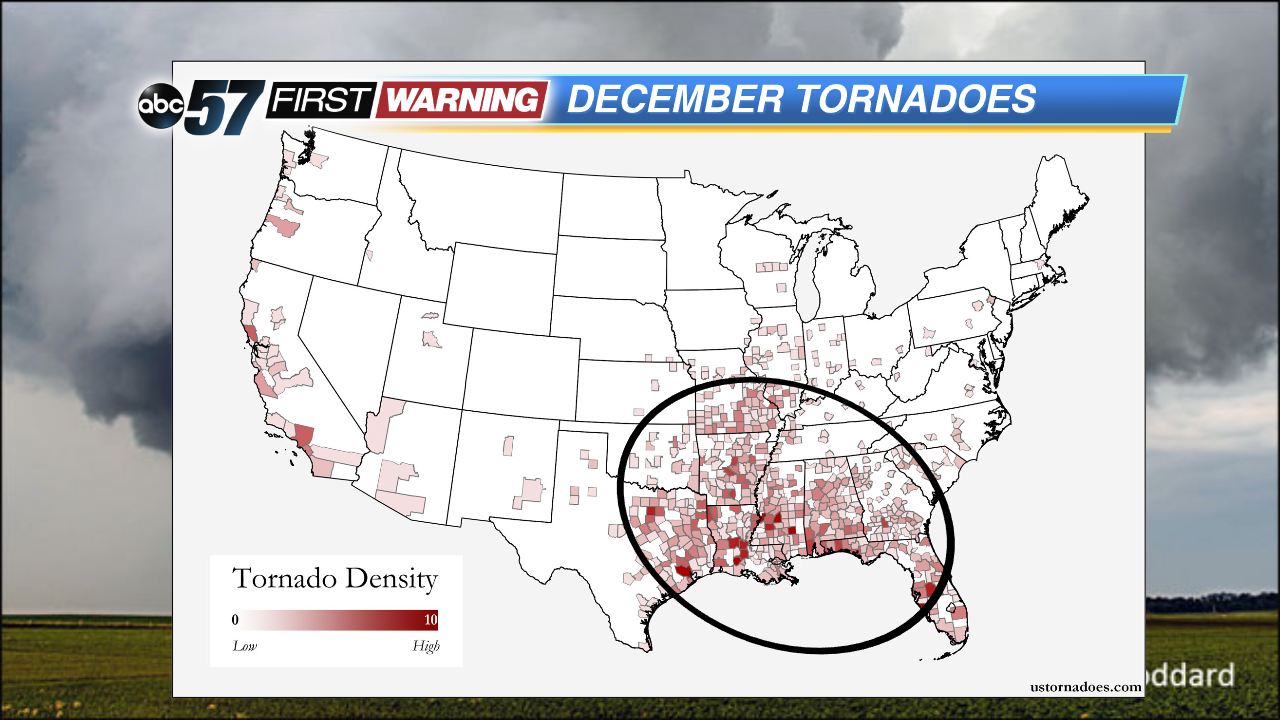 Tornado Density map. US Tornadoes
So what about Michiana? Are tornadoes worth worrying about in December here? Put simply, not really. Dating back to the 1950s, there haven't been many tornadoes in Indiana or Michigan. The right mix of ingredients usually doesn't come together in this region. But, believe it or not, you'll notice a significant increase in "good tornado setups" by simply crossing the state line from Indiana into Illinois. Illinois and neighboring Missouri see many more tornado-supportive setups due to their proximity to Gulf of Mexico moisture and areas of low pressure that move through. 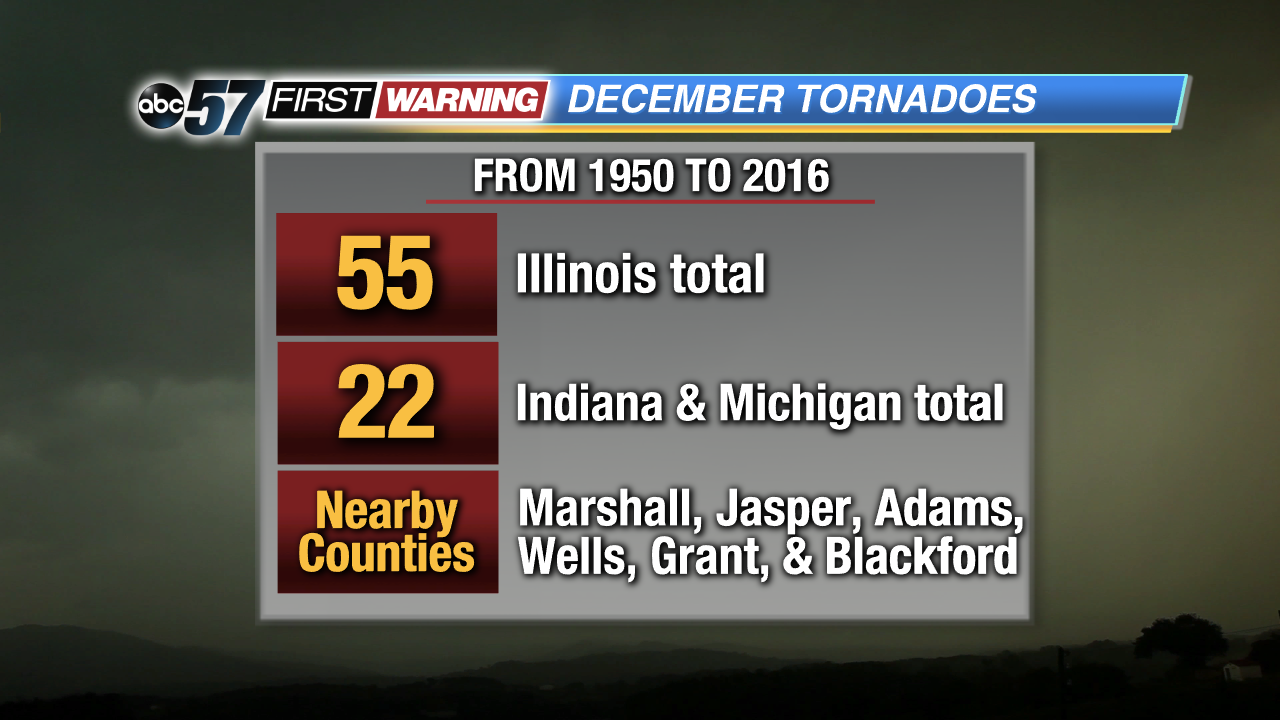 Tornado History Project
For perspective, Illinois saw 55 tornadoes touch down between 1950 and 2016. Of course, that number will jump dramatically once Saturday's outbreak data is factored in. Over those same 66 years, Indiana and Michigan saw a combined 22 twisters. That's less than half of what Illinois saw by itself. Despite this, you can't discount the 22 we have seen. If you're looking for averages, that number would translate to about one tornado touchdown every third December in the Hoosier State. And, while most of December's tornadoes in Indiana have touched down in the central and southern portion of the state, there have been a handful that have hit the northern third. Counties such as Jasper, Adams, Wells, Grant, and Blackford have each recorded at least one tornado in December. Marshall County has even recorded a tornado touchdown in December. On December 4th, 1973, a twister touched down near Bremen, stayed on the ground for a half-mile and injured one person.

The conclusion here is that history suggests tornadoes are an exception to the rule in both Indiana and Michigan during the twelfth month of the year. However, they can happen if the "right" variables are in place. And, as "Tornado Alley" continues to shift eastward, Indiana may eventually see more tornadoes in Decembers down the road.

For more on tornado averages and history, try these links: