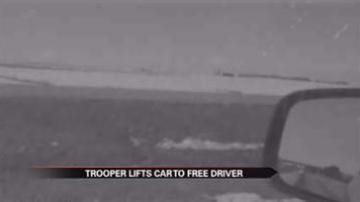 CHAMPAGNE COUNTY, Ill. — An Illinois state trooper is being called a hero. He saved a man pinned underneath a car.

It was a snowy day when the trooper got to the scene. He put his car in park and looked across the median. That's when he saw the victim.

"I made eye contact with him, and within a few seconds. I heard screeching tires, observed a black vehicle sliding sideways directly  towards him and the next thing you know, he was struck," said Brian Scott. "The vehicle traveled down the embankment and they both disappeared from my view."

Scott then called for an ambulance.

He asked the driver of that car and another man to help lift the car. Together, they were able to free the victim.

He is now on crutches and has some cuts and bruises.