In letter, Amber Pasztor says she wants to plead guilty to killing her children 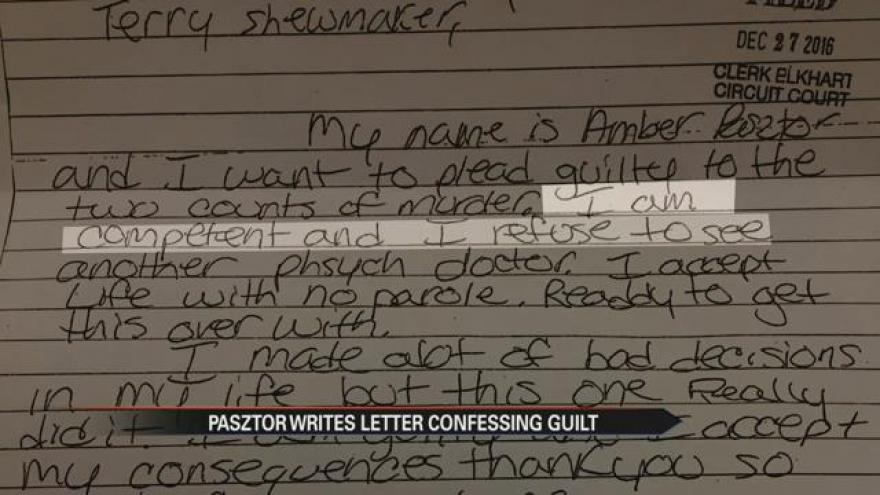 The woman who is accused of killing her two children after abducting them from their guardian near Fort Wayne sent a letter to the judge saying she wants to plead guilty.

In the letter, Pasztor says she wants to plead guilty to the two counts of murder and would accept life without parole.

Pasztor has participated in one competency evaluation and is scheduled for another on January 16 in Indianapolis.

Prosecutor Vicki Becker says regardless of the letter they have to move forward with the competency exam.

“The most important thing right now is making sure, procedurally we can move forward after competency has been determined," Becker said.

In the letter, Pasztor said she didn't want to see any more doctors. Becker says the exam is important for the case.

"We have to wait for that evaluation to be complete. Get the report back and then decide where the case will go from there," Becker said.

6:15 p.m. (approximately) The AMBER Alert is canceled because the children were found. Police have not confirmed the identities of the two people in the back of the Mercury. Autopsies are planned for Tuesday.

4:15 p.m. Officials held a press conference in Fort Wayne. They released new details including the fact they believe Macomber died before the children were abducted. In addition, the vehicle Pasztor was driving belonged to Macomber.

2 p.m. (approximately) The probable cause affidavit is released regarding Amber Pasztor's arrest. She told Elkhart Police she smothered her children.

She told investigators she kicked in the door of her father's home and took both children, according to the probable cause affidavit. She said she traveled to Elkhart with the children, and made several stops along the way including to a restaurant and park, reports said.

Amber Pasztor was officially charged with two counts of murder in the deaths of her children, Liliana and Rene.

Elkhart County Prosecutor Curtis Hill announced he would seek a term of life in prison without parole for Amber Pasztor because of the circumstances of the crime. Under Indiana law, a prosecuting attorney can seek an enhanced sentence of life without parole if the murder victim was less than 12 years old or if there is evidence the accused committed an additional murder.

Pasztor’s attorney notified the court they would use a defense of mental disease or defect.

Pasztor submitted to the competency evaluation and the results were sealed.

Pasztor is scheduled for a second competency evaluation in Indianapolis.