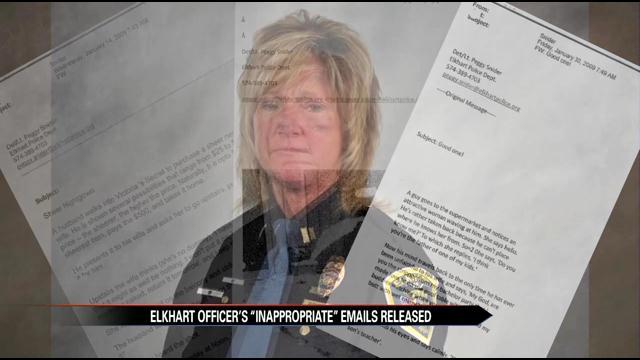 On Thursday, the Elkhart Board of Public Safety voted to suspend Elkhart Police Lieutenant Peggy Snider for five days without pay and she was demoted from lieutenant to investigator for sending inappropriate emails from her work email account in the fall of 2014. Those emails have been made public.

Maggie Marnocha, Utility Attorney for the City of Elkhart released 49 pages of public records regarding Snider.

There were multiple letters thanking her for her work on cases and compliments from the public. There were also eight examples of offensive emails sent by Snider dating back to 2009.

Not only did Snider share racy links and jokes but she also sent emails containing disparaging content that stereotype African Americans.

One email includes a picture of a woman named “Shanequa,” who according to a caption voted for President Obama and is waiting for a “stimulus check.”

On Thursday, Chief Laura Koch of the Elkhart Police Department addressed the Board of Public Safety about this matter.

“Lieutenant Snider now admits that the emails in question violate the city's policy and that is conduct unbecoming of an officer,” said Koch.

Friday morning, Chief Koch released a statement, “The Elkhart Police Department apologizes to anyone who may have been offended by these emails. We are confident that through education, training, and discipline that this type of behavior can be prevented in the future.”

Koch also says to prevent this type of incident from happening in the future all employees of the Elkhart Police Department will receive diversity training and training on city computer and email usage.