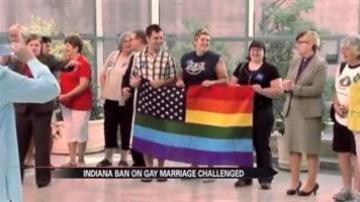 INDIANAPOLIS — Indiana's ban on same sex marriage is being challenged by a coalition of business and human rights groups.

More than 200 people set out to defeat the passage of the amendment that would write the same sex marriage ban into the state Constitution.

But there was an even split on legalizing gay marriage.