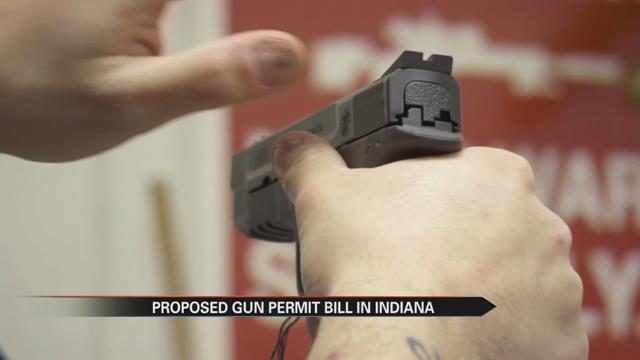 Gun rights are always a hot topic across the country, but now, a proposed bill that would eliminate gun permits, is under fire in the Hoosier state.  If the bill is passed, the law would allow anyone who legally purchases a gun, to carry it, without a permit.

And it's concerning many.

"It's really a disturbing trend, and I think lawmakers need to look at the big picture," says Linda Baechle, the Chief Executive Officer of the YWCA of Northern Indiana. "Lawmakers are going to say it's a constitutional right to carry handguns, and I think we need to balance that with common sense.

Common sense, that she feels, doesn't come with the recent push to eliminate handgun permits in Indiana.

"We know that having a previous conviction for domestic violence is one of the factors that disallow someone from purchasing a handgun, and that's very important," adds Baechle.

And as someone who deals with many domestic violence victims, she's worried.

"We know that a victim is 500% at a greater risk of being killed, if the perpetrator has a handgun in the household," explains Baechle. "States that have permits, there's a 38% reduction in the number of domestic violence victims that are killed.

It's something she feels strongly about, and says that anything that can be done to take away handguns from perpetrators, is good.

She's not the only one. Local law enforcement says, this can impact officer safety too.  A quick check of a driver's license at a traffic stop, allows officers to know exactly who they're dealing with.

"It means they've been vetted through a pretty stringent process," says Capt. Mike Kellems with the La Porte County Sheriff's Department. "Not having the need for a handgun permit is going to allow anybody to posses a firearm, without us having that extra tool in our toolkit, when it comes to encounters with someone."

A layer of protection that they'd like to keep.

That's a mindset shared by many law enforcement departments in Michiana.

"We reached out and talked with other department, the Indiana Sheriff's Association, and they're in support of our position, that abolishing a handgun permit process, would be detrimental to law enforcement," explains Capt. Kellems.

Detrimental to law enforcement, in safety and financial matters.

Local law enforcement agencies, get significant revenue from the handgun permit process.  In La Porte, the money allows them to fund their firearms training program.

With it, they purchase weapons, operate the Sheriff's range, and buy ammunition.

According to Indiana State Police, there are 753,974 active handgun licenses in Indiana. That is significant revenue that is depended on by police and deputies.

"I think it does add another element of danger to public safety," says Capt. Kellems. He adds that he, and many other police officers, are big believers in the second amendment.

But, he says, "asking somebody to be vetted through the process of getting a handgun permit, really isn't too much of a requirement. It gives that added measure of public safety. Not only for the citizens out there, but police officer safety as well."

With the community in mind, a plea from those who have the most to lose.

"I hope lawmakers leave the law as it is," says Beachle. "Allowing just anyone to purchase a handgun is going to have a really detrimental effect on public safety in our community."