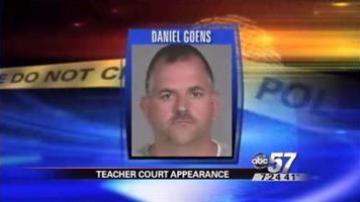 INDIANAPOLIS, Ind.--Tonight an Indiana high school teacher appeared before a judge on allegations of raping a 16-year-old student.

Forty-five-year-old Daniel Goens was a teacher at Monrovia High School. A 16-year-old girl came forward in September, telling police that Goens had sent her sexual text messages and forced her to have sex with him in late April.

Goens appeared emotional as he looked at family members in court today. His bond is set at $40,000.