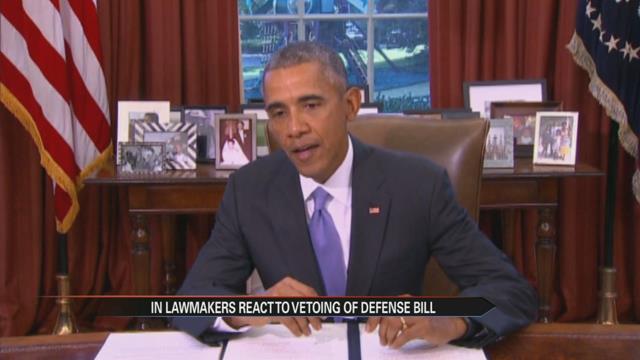 Republican Indiana lawmakers are among the many members of Congress slamming President Obama for his recent veto of a big defense bill.

The National Defense Authorization Act is valued at $612 billion and was vetoed by Obama because it fell short in many key areas, in his opinion.

Among the many Republicans opposing Obama’s decision is Representative Jackie Walorski, who serves Indiana’s 2nd District.

“The president vetoed this defense budget in order to gain leverage for additional increased spending, his demands of spending,” Walorski said in a video posted online of her speaking on the House floor earlier this week.

Walorski said it was frustrating to see Obama veto a bill that had been approved by lawmakers for the last 54 years.

“[With this veto, Obama] has threatened to end this staple of bipartisanship in this chamber,” Walorski said.

The National Defense Authorization Act is a sweeping measure that serves as the financial skeleton of the U.S. military.

It helps keep the military funded, determines budgeting for defense construction projects, helps adjust pay and retirement benefits for those who serve our country and authorizes what strategic programs receive money, like cyber security.

“I’m going to be sending [the bill] back to Congress and my message to them is very simple: Let’s do this right,” Obama said.

The veto has triggered a barrage of negative comments from Republican lawmakers, including Indiana’s seven Republican members of the House who released an op-ed Friday.

“[President Obama’s] veto reveals a shameless prioritization of a political agenda over the needs of our service members,” the op-ed said. “[The president is] using our military as a political pawn and putting America at risk over a demand that can’t be met in any defense authorization bill.”

Obama highlighted his main problems with the bill in his Oval Office signing.

He said he wants the military to be funded by a designated amount of money that is not available for use in other areas if Congress determines it necessary.

He also said he wants to reform the military according to the Pentagon’s suggestions and he wants to close Guantanamo Bay, something many Republicans are sharply against.

“It’s time for us to close [Guantanamo Bay],” Obama said. “It is outdated, it is expensive, it has been there for years and we can do better.”

“The least we can do is offer them the security of knowing that they can provide for their families and plan for their own futures,” Walorski said.

Walorski is scheduled to appear on Fox News Channel Saturday afternoon around 1 p.m. to discuss the veto.

In the mean time, Republican lawmakers are working to gather enough votes to override the president’s veto, but the White House said it’s confident the veto will stand based on Democratic support.