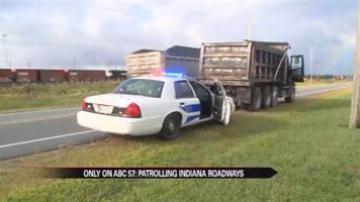 "I would say in this day and age, there's probably a lot more commercial motor vehicles that are out here than in times past," said Reeves.

That's why his Division of Commercial Vehicle Enforcement is cracking down.

This past year has brought an increase in statewide crashes.

There were 474 accidents on Indiana Roads.

Reeves said some of those involve overloaded semis.

"You're talking about a vehicle that has the potential to way around 80,000 pounds," said Reeves. "If you have break failure, or if you're overweight, it's going to take more time to stop."

It's illegal to carry more than 60,000 pounds without a permit.

But despite what's written, Reeves said many trucks try to sneak through.

Overloaded trucks pose more than just a danger to other drivers. They can damage roads or bridges like the one on Michigan Street near downtown South Bend.

"There are laws that need to be obeyed," said Reeves. "It all happens for a reason."