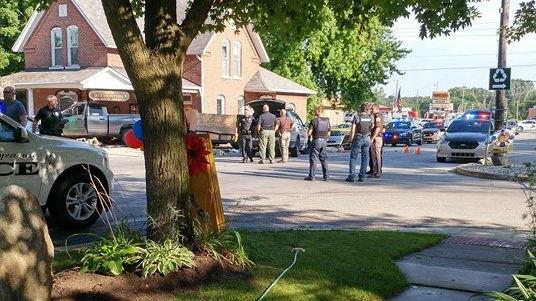 Indiana State Police are investigating an officer-involved shooting that happened after an alleged road rage incident.

The Kosciusko County Sheriff’s Department received a 911 call of a road rage incident involving a man with a gun believed to have begun in Syracuse near the Pride Gas Station on State Road 13.

At some point during the encounter, the driver of a pickup truck fired several shots at the other driver, police said.

A Kosciusko County officer found the two vehicles involved in the incident in North Webster.

A short time later, the deputy was involved in a crash at the intersection of Main Street and Huntington Street with the pickup truck and driver that was suspected of shooting at the other driver.

The force of the crash sent the suspect's truck into a brick building on the corner.

When the deputy approached the pickup truck, he fired his weapon at the individual in the truck.

Police say the facts and circumstances surrounding the shooting are being investigated.

The driver of the truck was taken to Parkview Hospital in Fort Wayne for treatment of his injuries related to the crash and for a gunshot wound.

The deputy was taken to Kosciusko Community Hospital for injuries he received in the crash.

The condition of the other driver is unknown at this time.

Police say the names of the parties involved as well as the name of the deputy will be released within the next 48 hours.