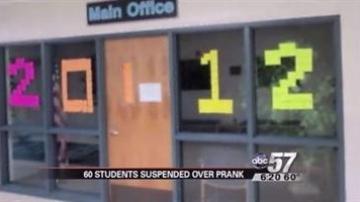 CLAYTON, Ind. -- On Wednesday, dozens of students got suspended all because of a senior prank.

The Cascade High Schoolers were protesting the suspension of six classmates who decorated the school on Monday with 12,000 Post-it Notes.

The kids said a school board member gave them the key and the head custodian helped them to coordinate the time.

The superintendent claims they didn't have permission to be there, so they needed to be punished.

"Fortunate there was no damage, but they didn't permission to be on the premises and there are consequences for that," said Superintendent Patrick Spray.

"To send them out of school the last week for finals and we're talking the majority of seniors, is irresponsible," said Robert Canaday, a parent.

Nearly 60 student protesters got suspended on Wednesday morning when they wouldn't go back to class.

Now seniors who participated will still be allowed to graduate, but the custodian who helped them lost her job.