Indiana town left without police force after every officer quits 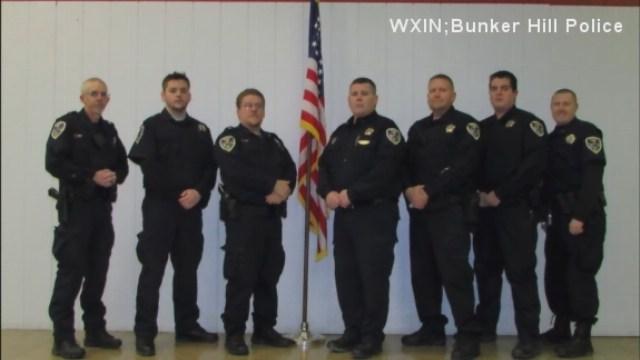 BUNKER HILL, Ind. (CNN/WXIN) -- Every member of the Bunker Hill Police Department in Indiana quit this week, leaving the town without law enforcement. The officers say their resignations are due to a dispute with the town council.

“We have had issues with the town board and there are some activities there where I felt like they were serving their own agenda,” said former Bunker Hill Town Marshal Michael Thomison.

Thomison served as town marshal for four years until Monday night when he and four other officers handed over resignation letters to the council, saying they have had enough.

“They would not communicate with us or the officers and they kept scaling back,” said Thomison.

In their resignation letters, the officers accused council members of asking them to do 'illegal, unethical and immoral things.'

They cited examples like asking police to run background checks on other town council members to find their criminal history.

The officers also claim they were threatened when they said no.

Another issue they brought up in the letter was their safety.

The officers said they were forced to share one set of body armor, which forced them to put their lives on the line while out making arrests and serving warrants.

"I don't want to send someone out there with bad body armor so I would take mine off and provide it to the other officers. I told them we have to provide this - there is an IC code that explains that and says that the town has to provide that body armor," said Thomison.

Thomison adds his resignation was personal.

Thomison says he was diagnosed with cancer last year and when he was ready to return to work in May, the council would only allow him to work part time.

He blames the town council and plans to file a lawsuit against them.

"They came at me and said that it is costing the town way too much money because of my insurance and they said we are taking you down to part time," said Thomison.

Thomison and the other officers say they did not want to step down but felt they had to.

For now, the town is relying on outside help as they search for new officers.

"I know that they are scrambling and they've contacted some other officers that do not want the position," said Thomison.

Like most small towns, there have been from time to time, disagreements in the policy making process between the town council and other town departments. The current town council as well as prior councils have, on occasion, had disagreements with Mr. Thomison over a number of things. These disagreements have primarily been caused by the lack of funding available to the town to invest in the police department. However, the council denies that it has failed to provide body armor for the marshal or reserve deputies. The council is well aware of Indiana law on the topic and has complied with it fully. Further, the council absolutely denies that it has ever asked Mr. Thomison or any of the reserve deputies to be involved in any illegal, unethical or immoral actions.

The council admits that it had made a number of cuts to the police department over the last few years. This was a decision the town made due to a lack of funding. Bunker Hill is diligently working to solve this problem for the coming year. The cuts made to the police department were not made with the intention of jeopardizing the safety of any of the town's police officers. Over the last few years, the Council has made attempts to find additional money for the department. Mr. Thomison was instrumental in obtaining a large sum of money on behalf of the town. However, he fails to state that the police department received the benefit of a large portion of that funding.

The resignation of the entire police force has come as a shock to the council. It has never been the goal to dismantle or otherwise endanger the town police department or officers. The council thanks these officers for their service to the town. Bunker Hill is in the process of obtaining a new marshal and reserve deputies. The council asks for patience from the town residents in this process.