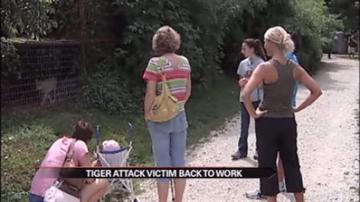 CLAY COUNTY, Ind. — An Indiana woman who was mauled by a tiger at an exotic feline rescue center is back at work at the same rescue where she was attacked.

Despite what happened, Dub says she loves her job and doesn't blame the tiger.

Dub is still recovering from her injuries and says she'll be in therapy for quite some time.