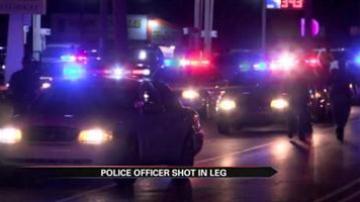 INDIANAPOLIS -- A Police Officer that was shot and injured on duty in Indy was back home Tuesday.

This shooting comes four-days after a fellow officer was shot and killed.

Witnesses say a group of men were arguing outside an apartment building, that is when they heard gun shots.

When police got there, they found Officer Gregory Stevens shot in the leg. A second officer returned fire injuring the shooter.

"Bad guys are not gonna win. These district officers are some of the best in the country. They believe in what they're doing. They believe in the mission and they'll succeed," said Chief Rick Hite.

Both men are expected to be okay.