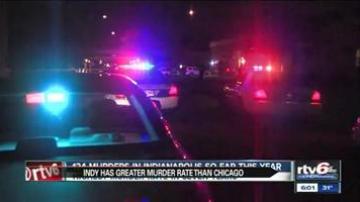 INDIANAPOLIS -- Alarming homicide rates out of Indianapolis show there have been 124 homicides this year.

It is the highest homicide rate the city has seen in seven years.

Three of those homicides were reported this weekend.

Comparing those stats to Chicago's, Indy has seen about 10 percent more homicides per capita than the windy city.

It is the first time Indy has exceeded 100 homicides since 2008.