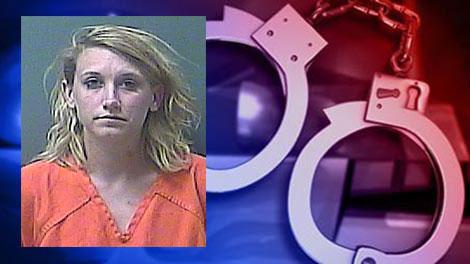 An Indianapolis woman is facing armed robbery charges after allegedly stealing a woman's purse Thursday afternoon, according to a press release from La Porte Police.

Around 2:30 p.m. Thursday, La Porte Police were called to a business at 702 Lincolnway for a robbery in progress.

The 60-year-old victim as in the rear lot of the business and had placed her purse on top of her vehicle while she loaded her merchandise.

Police say Chelsea Pitcock, 25, grabbed the purse and ran from the scene.

The victim's husband, 61, ran after Pitcock and a bystander also joined in the chase.

As the two men closed in on Pitcock, she allegedly pointed a handgun at them and told them to get back, reports said.

Pitcock ran to an older model turquoise van and the van fled the area, report said.

La Porte Police spotted the van as it pulled into a driveway on Bond Street.

The female driver got out of the van and ran to the back of the home.

Pitcock remained inside the van and was taken into custody.

The handgun, which was reported stolen, was located inside the van, police said.

The driver of the van was located and spoke with police. She provided a statement and was not charged.

Two witnesses told police they saw a woman pass by their home around the time of the robbery and saw the woman counting money from a wallet that was dropped on their property.

The wallet was located and it was determined to be the victim's. Her purse was also located near the scene.

Pitcock has been charged with robbery while armed with a deadly weapon, a Level 3 felony.

She will be arraigned on May 11.