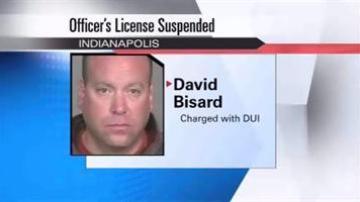 INDIANAPOLIS — An Indianapolis police officer's driver's license has been suspended after he allegedly drove under the influence for the second time in three years.

David Bisard crashed his truck into a guard rail on April 26 in Indianapolis.

Police say they found an open bottle of vodka in his truck. And his blood alcohol level was three times the legal limit.

A court hearing on Wednesday lasted only four minutes.  The judge entered a not guilty plea on behalf of Bisard.

He is now being held without bond in a Marion County jail.