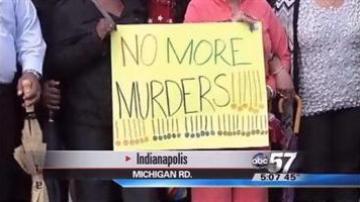 INDIANAPOLIS, Ind. -- In Indy 13 people were arrested during what was supposed to be a peaceful march.

The march was in honor of murdered Florida teen Trayvon Martin. Members of the Light of the World Christian Church joined arms and actually blocked traffic on Michigan Street.

Police asked demonstrators to leave twice but they refused.  Protest organizers say the peaceful event was meant to bring attention to the injustice of the Florida teen's shooting death.

Instead, those 13 church members were arrested and thrown into jail.