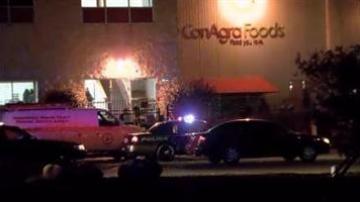 INDIANAPOLIS -- Investigators in Indianapolis are trying to figure out what sparked a deadly workplace shooting at one of the nation's largest food companies.

Police said the shooter fired at a coworker and then took his own life.  The shooting happened in a ConAgra Foods plant Friday evening.

The victim died at the hospital and the suspect was pronounced dead at the scene from a single gunshot wound to the head.

Authorities are not yet releasing the identities of those involved.

Investigators are now scanning surveillance video and interviewing other employees to try and piece together what happened.