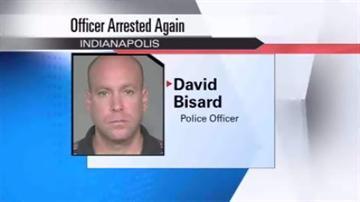 INDIANAPOLIS — An Indianapolis police officer charged with causing a fatal 2010 crash while driving drunk is in trouble again.

David Bisard was arrested and booked on a misdemeanor charge of drunken driving.

Bisard was already charged with operating a vehicle while intoxicated, reckless homicide and criminal recklessness in the 2010 crash that killed one man and injured two others.

His case got so much media attention in central Indiana that the case was moved to Fort Wayne.