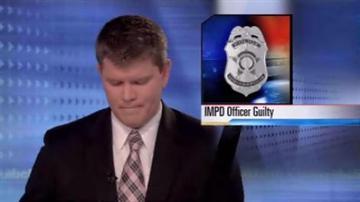 INDIANAPOLIS -- A police officer in Indianapolis was found guilty of robbery and misconduct.

David Butler was suspended and then found guilty after the jury deliberated for four hours. His first trial, for the same charges, ended in a hung jury.

He is convicted of targeting Hispanic men for traffic stops, then robbing them. He will be sentenced later this month.