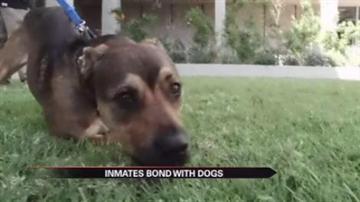 LOS ANGELES -- Some dogs are getting a second chance at life with the help from inmates.

At Los Angeles County Jail 36 inmates are taking care of dogs that were supposed to be euthanized.

It is part of a new program, where inmates live with the dogs 24-7 bathing, feeding and training them.

Some inmates say that bonds have now been forged between them and dogs.

"I've almost died on the street too. I've been shot. You know. Just to give this guy another chance,  because I'm thankful for me having another chance at living too," said Caesar Cunanan, jail inmate.

Inmates also say these dogs have taught them a stronger sense of responsibility.