Inside the battle for Mosul: Gunfire, car bombs and suicide attack 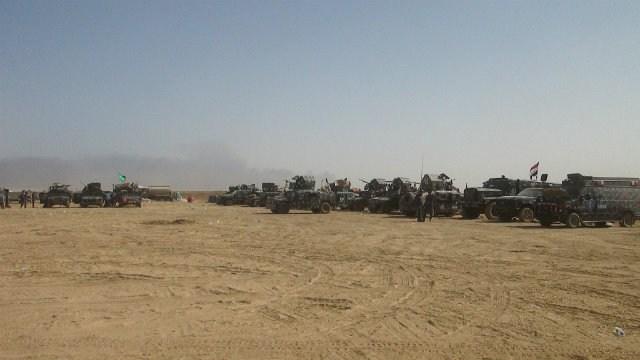 OUTSIDE MOSUL, Iraq (CNN) -- On a road several kilometers outside Mosul on Monday, a convoy of Peshmerga fighters got a taste of the resistance the Iraqi army and police are facing inside the volatile city.

This stretch of road and the villages along it -- once they're fully cleared of ISIS militants -- will represent a great prize for the Iraqi military in its push to rout the terror group in this oil-rich northern Iraqi city. (CNN is not revealing the exact location for security reasons).

If anything about this offensive is clear, it's that ISIS won't be handing over Mosul. The group's existence in Iraq hinges on this fight, and the Iraqi, Kurdish and paramilitary forces waging battle expect ISIS to fight with a real sense of desperation.

Once the Peshmerga advanced past a series of berms that had separated them from the militants, a suicide car bomber hurtled toward the Kurdish fighters. It took three attempts to blow up the car.

Showing that a single fighter can pose a dangerous pocket of resistance, an ISIS gunman who had been hiding in a cave or in the network of tunnels leading out of the city opened fire on the Peshmerga. The Kurds engaged the militant in a firefight before he apparently blew himself up.

With dark gray smoke rising over Mosul, another explosion erupted down the road from the fighters, likely one of the many car bombs ISIS has planted in and around the city in anticipation of what is expected to be its last stand in Iraq.

At one point, several dozen pops from semiautomatic weapons rang out from both sides of the road, followed by what sounded like controlled bursts from an automatic weapon.

The gunfire -- part of a shootout between Iraqi fighters and ISIS -- sent journalists and the Peshmerga scrambling for cover behind trucks.

Military experts have said the battle for Mosul could be a long and messy melee. Judging from the first day of fighting on the city's outskirts, there is little indication it will be anything but.