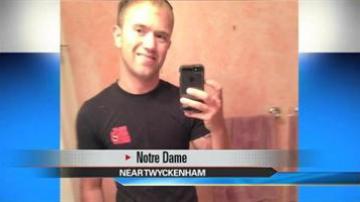 NOTRE DAME, Ind. -- The Occupational Safety and Health Administration is investigating Thursday's accident on the Notre Dame campus that killed 22-year-old Mark Ellsworth Jr when a tree fell on him.

Ellsworth, an employee of R&R Excavation, was clearing trees in a wooded area at Twyckenham and Bulla.

We looked through OSHA inspection reports for Indiana and Michigan and learned that in the last decade, R&R Excavation has not been cited for any violations.

After the accident Thursday morning, construction at the scene was halted.

We learned the state of Indiana is launching its own investigation.

"It is about worker safety. Period. That is our approach," said Bob Dittmer with the Indiana Department of Labor.

The Indiana Department of Labor oversees the Indiana Occupational Safety and Health Administration.

Dittmer says all fatalities on the job require a safety inspection report.

At this time, little is being released about the accident, but the state says it is focused on ways to keep this kind of tragedy from happening again.

"More than likely and often we find there were some safety standard violations and as a consequence of our investigation if we find those, we'll issue what is called a safety order," said Dittmer.

That order could mean fines and action to fix any problems identified by investigators.

We went to R & R Excavation to ask them what happened, but they declined to comment on camera.

State officials say they'll be spending the next few months looking over the job site, equipment, and employee training records.

"It's a very, very thorough inspection of the safety processes that company brings to their work," said Dittmer.

In the meantime, R & R Excavation can continue to operate.

Dittmer says the investigation will last about three months.