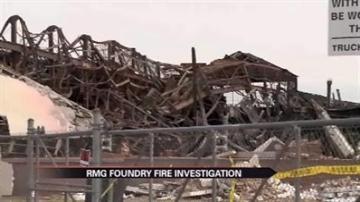 MISHAWAKA, Ind. -- On Monday, investigators got their first look inside the RMG Foundry building in Mishawaka that burned in February. Crews say they have been waiting for the building to cool off before heading inside to look at the damage.

It has been 21 days since fire crews battled near 40 mile per hour winds to put out the massive fire at the former RMG Foundry.

On Monday, investigators were racing against the weather clock again.

"Depending on the weather, allow us to get involved a little bit more maybe day or two. Maybe by the end of the week we have a little better idea of what we're dealing with,” said Steve Gregg, Mishawaka Fire Marshal.

Gregg says there were roughly 30-35 people on scene Monday including insurance and legal representatives, the owner and the state fire marshal.

Ann Shutes said she has been told her car wasn’t damaged but is still waiting for a chance to get a look at it.

Fire investigators say they're focusing their investigation on the front southwest side of the building.