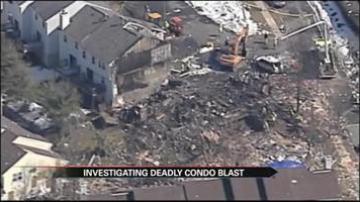 EWING, N.J. -- New Jersey investigators are digging through rubble and debris trying to find out how a gas line ignited, sparking an explosion that killed one woman and injured seven others.

The blast damaged more than 50 condos.

At a news conference Wednesday morning, the town's mayor said the gas line was marked in the area where a contractor was working Tuesday before the explosion.

Police have not released the name of the woman who was killed and will not until an autopsy can confirm her identity.

They do not know if she was inside or outside at the time of the blast.

Her body was found on top of a car parked near the explosion site.