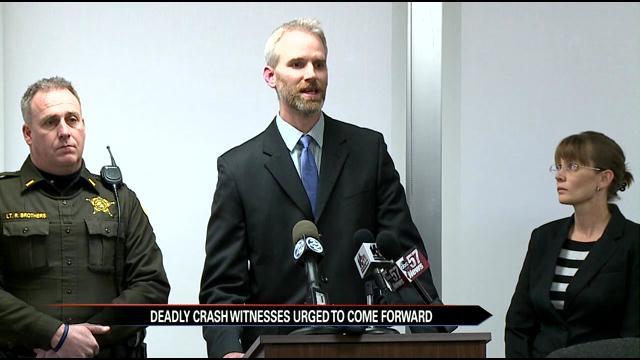 Police are searching for witnesses to a deadly accident on East Ewing Street in South Bend Saturday December 6. Amy Mitchell was struck by a vehicle and killed while crossing the street.

The driver of the car, John Staton, was arrested that night on suspicion of operating a vehicle while intoxicated (OWI).  But now officials are left with the tall task of trying to prove whether or not Staton's actions caused Mitchell's death.

“The tragedy is unimaginable to most of us,” said Roule at the press conference. “This quantifies with the most important cases we have."

Stanton has not been charged in the accident.

“To prove the case, the state is required to establish that the driving of the intoxicated person did cause the death, not simply that they were intoxicated and driving,” explained Roule. “If someone were driving down the street, driving the speed limit, not swerving, was later found to be impaired and caused a death, that would be inadequate to establish OWI causing death.”

“All the witnesses who may have seen how the suspect was driving, what exactly occurred at the time of the accident, those are critical witnesses," said Roule.

“She was my heart, she was my rock, I just want justice to be served.”

Prosecutors say they have talked with two witnesses but there is one more witness they need to talk to.

They believe the person who saw the crash was driving down Ewing Street after 9 p.m. Saturday.

Depending on what witnesses say, Staton could be charged with an OWI, which would be a misdemeanor, or OWI causing death which is a felony and carries a lot more weight, up to 20 years in prison.