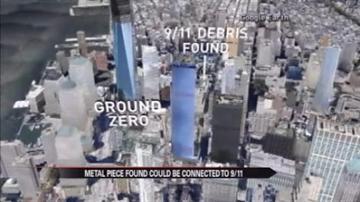 A massive metal part of an airplane was found that is believed to be landing gear from one of the hijacked jets that crashed into the World Trade Center.

It's now wedged between two buildings just a few blocks from Ground Zero.

While investigators figure out how it got there, it's opening wounds for many New Yorkers.

Authorities will wait until Monday to determine how they will move the part from its location.