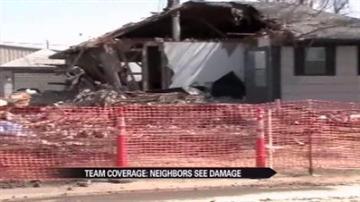 SOUTH BEND, Ind. – North Iowa Street in South Bend was reopened to the public after the wreckage of the small jet was successfully removed. Once the road was reopened, many people went to the neighborhood to see the site close up.

The road reopened after the last flatbed truck hauled away the final load of airplane wreckage.

The plane was taken to a hangar at the South Bend Regional Airport.

Although the street has been cleaned, debris still remains.

The three houses that were hit by the plane remain fenced off, but the damage is clearly visible.

"It's devastating, I can't believe it, I mean it's total destruction,” said nearby resident Phil Gross.

"I don't know what's going to happen, They’re just going to have to tear the whole house up, I guess,” said neighbor Mary Jane Claybor.

"It's more than I imagined and you can't imagine that he'd be coming straight down that he could take out that much area,” said Ron Wolff, who lives in Walkerton.

The front corner of the house at 1614 N. Iowa Street had to be removed to lift the plane out.

Next door, the entire back of the home is gone.

According to the mayor’s office, everyone has been allowed to return home except for the residents of the three homes that were damaged by the plane.

The mayor’s office says fire personnel have gone into those three homes to salvage personal belongings for the residents.

The South Bend Police Department continues to provide security at the site because the investigation is still ongoing.