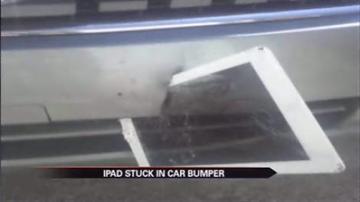 ATLANTA -- iPads have been flying off shelves but one went straight into a woman's bumper.

A Georgia woman says she saw something come flying at her while driving but says she never heard an impact.

When she parked, she found an iPad still intact but so deeply wedged into the car that she needed a hammer to get it out.

"I kind of hit the brakes and stopped but I didn't feel anything didn't see anything so I went about my day," said the woman.

The woman was able to open an app to get the owner's name and phone number so she could return it.

That driver says he accidentally drove off with the iPad on top of his car.