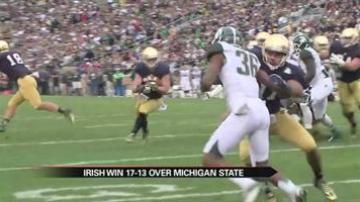 NOTRE DAME, Ind.-- The Irish earned their tenth consecutive win at Notre Dame Stadium against Big Ten opponent Michigan State--17-13--improving their record to 3-1 on the season. Head Coach Brian Kelly said at the post-game press conference that they key to defeating the number one defense in the country was in their passing game.

Notre Dame came out strong and steady in the first half with a 41-yard field goal from Kyle Brindza followed by a two-yard pass from quarterback Tommy Rees to TJ Jones into the end zone with seconds to go in the second quarter.

"Yeah, it's what we expected. Excellent football team in Michigan State. Physical, great defense. We knew it was going to be this kind of football game. Somebody was going to have to score a touchdown in the fourth quarter. We were able to get the touchdown and hold them from scoring one," Kelly said.

Althought the Irish laid low in the third quarter, they gained momentum again in the fourth with a seven yard run made by Cam McDaniel for the game-winning touchdown.

"I don't know how many times I had a safety up in my grill towards the end of a run or right as soon as I got past the line of scrimmage, and we knew it was going to be tough but we embraced the challenge and we just wanted to compete tonight and that's what we did," running back Cam McDaniel said.

Kelly did say there were some missed opportunities for the Irish, although he was happy with tonight's win. Rees agrees and says he would like to see the offense get more aggressive.

"Obviously we'd like to put more points on the board.  Michigan State has a real good defense.  We grind enough drives and points to find a way to win that game.  Battling in those close ones, it's exciting to win those," Rees said.

The Irish will be back at home next week to take on the undefeated Oklahoma Sooners who were off this week.