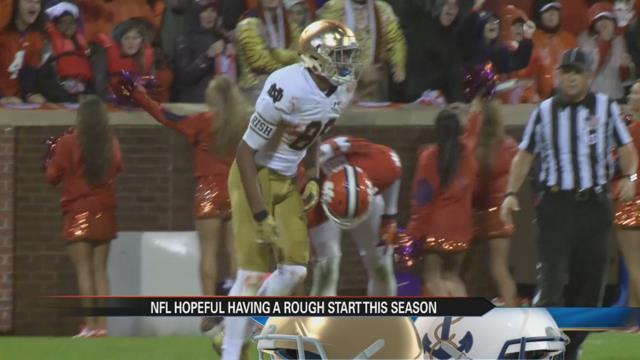 Notre Dame coaches are hoping that wide receiver Corey Robinson can bounce back from a rocky start to the season.

Last season, Robinson played in all 13 games and was second on the team in receptions and touchdown catches.

Because of that he got a lot of attention from NFL scouts, some projecting him as a first rounder.

But both he and his head coach say it's too early to write him off.

"I believe in Corey. Corey's got to believe in himself," said Head Coach Brian Kelly.

In last Saturday's loss to Clemson, the 6-foot-4 receiver could only haul in one catch for 15 yards, dropping what could have been a 2 point conversion. But he isn't making excuses.

Coach Kelly says he has spoken with his struggling star to get him back on track.

"I can't be too much of an individual. I can't get inside my own head. I'm a receiver on the receiving corps at Notre Dame," said Robinson.

"I'm optimistic that we are going to see the guy that we need to see on Saturday," said Kelly.