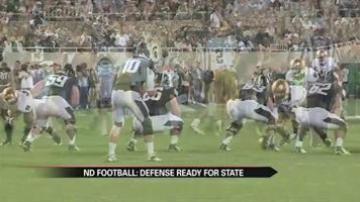 NOTRE DAME, Ind.--  After last week Michigan State officially decided who would lead their offense this season, and that guy is third-year sophomore Connor Cook.

In just two days the Irish defense will go up against an offensive line that will really test them this Saturday.
The Spartan front line has only given up three sacks in three games, but they've also played against pretty mild opponents such as Youngstown State, Western Michigan and South Florida.
Head Coach Brian Kelly believes one of the keys to an Irish victory will be stopping Michigan State quarterback Connor Cook.
"I think if we can get him into some predictable passing situations where we can force them to throw the football and we know it, that's going to help us," Kelly said.
So far, Cook is just 55 percent passing on the season with 370 yards and five touchdowns. But Cook isn't just a threat in the passing game, he can run the ball too.
"They've got some balance now where they can run the football with the quarterback in some longer yardage situations and put you at risk if you're firing up the field and they're running the quarterback," Kelly said.
So is Cook a threat to the confidence of a defense that has allowed 71 points in its last three games?
It's a much different story for this Irish squad compared to last year. It took the Irish eight weeks in 2012 to allow the same amount of points, but the Irish still believe the confidence is there and they are ready.
"It's not in our confidence, it's just lack of execution. We've just got to work on our assignments and get better at it," Irish outside linebacker Prince Shembo said.
In the red zone, the Irish defense has had about half of the success they did last year, but Shembo says that feeling of knowing they can stop anyone in the red zone is still within him and his teammates.

One way Kelly foresees his defense getting back on track is by succeeding in man-to-man coverage this weekend.

"We've got to win some one-on-one matchups, some that we haven't won so far that we need to win this weekend," Kelly said.

Kelly said although Cook will play a role in managing the game for Michigan State, what the Irish are most focused on this week is the Spartan defense--ranked number one in the nation--and its ability to control the football.