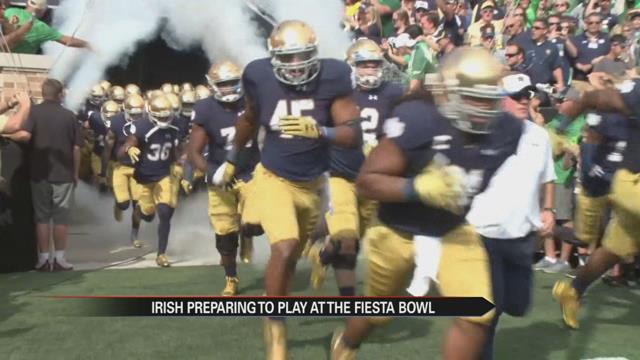 The Fighting Irish are headed to the Fiesta Bowl. And while it's a major game, it's not the title fight Notre Dame hoped to play in.

"I won't tell you that they were jumping up and down," said Brian Kelly. "There was none of that. Look they are disappointed they aren't in the playoffs."

"You get your hopes so high and you say your mission to be in a national championship and you start to feel a little bit of disappointment," said Deshone Kizer.

But that doesn't mean they'll stop fighting. Notre Dame hasn't won a major bowl game in more than 2 decades. And they lost to Ohio State in the fiesta bowl a decade ago. That applies added pressure to leave Arizona with a W.

"Not being there in awhile and not playing well in 2012 on a national stage. It's very important for us to play well and win the game," said Kelly.

"It's incredibly important to us," said Joe Schmidt.  "Try to honor the last four or five years for the graduating classes and really just try to put the finishing touches on team 127."