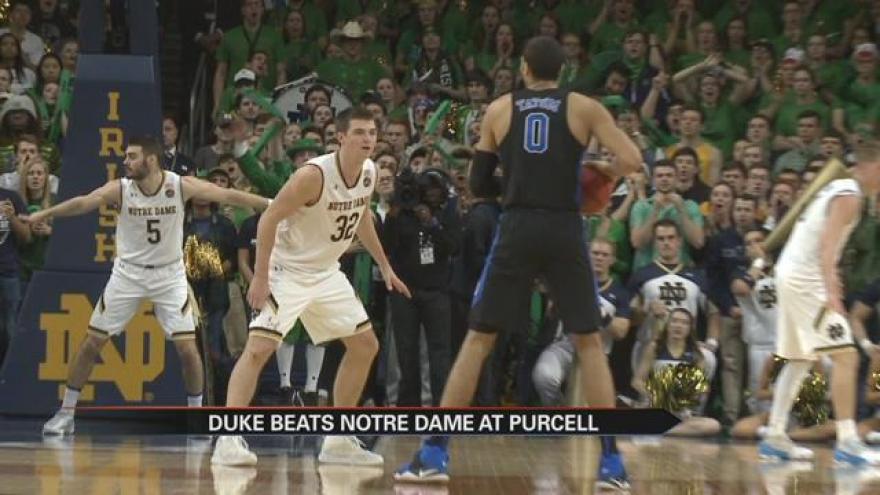 Senior forward V.J. Beachem scored a team-high 20 points on 7-of-14 shooting and added three rebounds. Junior forward Bonzie Colson added 17 points, finishing 8-of-12 from the field, and finished one rebound shy of a double-double with nine. The other two Irish players to finish in double figures were freshman guard T.J. Gibbs, who scored 12, and junior guard Matt Farrell, who totaled 11.

Notre Dame and Duke traded baskets in the opening 13 minutes of the contest, as the score was knotted up at 21-21 with less than seven minutes to play in first frame. The Blue Devils managed to control the remainder of the half, as Duke took a 37-25 lead into the halftime intermission. Beachem paced the Irish with nine points in the opening 20 minutes of action.

The Irish had a great start to the second stanza, scoring nine of the first 11 points to cut the Blue Devil lead to five points at 39-34. Duke pushed its lead back up to double digits, holding a 63-50 advantage with 9:31 left in the game. However, Notre Dame continued to battle and ripped off a 12-0 run to send the raucous sell-out crowd into a frenzy and cut the visitors lead to one at 63-62 with 6:24 to play.

Notre Dame contributed to this report.