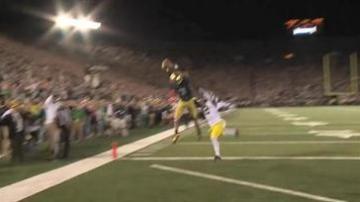 NOTRE DAME, Ind.-- Saturday night's historic rivalry was predicted to be a close one, however, it was anything but. And Irish Head Coach Brian Kelly says his team's success lies a lot in its youth.

“It was a total butt kicking all the way around that we all took,” Michigan Head Coach Brady Hoke said after Saturday night's game.

No matter how you slice it.

“I would be lying if to tell you that it doesn't feel great to shut out Michigan 31-0,” Kelly said.

“Attention to detail.  Physical play.  It was very crucial defense to the game of football.  And we really executed on that side,” Irish lineback Jaylon Smith said.

Thanks to a stingy Irish defense that kept the Wolverines from putting any points on the board.

“The third down was -- it was key.  Getting to third down to where we can spread them out and do what we want, play on our terms,” Smith said.

Play on their terms they did. Irish quarterback Everett Golson completed 23 of 34 passes for three touchdowns, racking up 226 yards through the air.

“I think we wanted it bad.  I think that we wanted to just be successful every time we step on the field,” Golson said.

And for the blue and gold, they say Saturday's win is just the beginning.

The 2-0 Irish will head to Lucas Oil Stadium next week to take on Purdue in the Shamrock Series. We'll be there so be sure to stick with ABC 57 for your continuing coverage of Fighting Irish football.