Irish in it to win it for the seniors this week 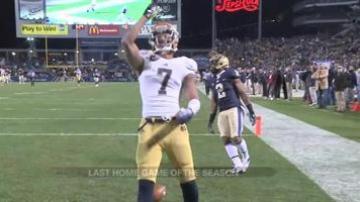 NOTRE DAME, Ind.-- This year's senior class has led Notre Dame's Fighting Irish to a total of four bowl games, including a national championship game. Head Coach Brian Kelly and their teammates say the leadership and character the seniors have brought to the program will never be forgotten.

“We’re always with each other, whether it’s football, school or on the weekends. We’re just a big family,” Calabrese said.

This year's class is the last recruiting class of the Charlie Weis era, and because of that, Coach Kelly says he has formed a special bond with them.

“I think we have a different relationship in a sense, a unique relationship with these guys in that, they had to trust us and that in itself as a group, is a great dynamic,” Kelly said.

And their younger teammates who they will leave behind, say this week, they are playing for the seniors, who have become more than leaders to them, but also role models.

“I have Zack, my brother on the offensive line, Chris Watt, Tommy Rees, obviously all of the seniors, but I’m probably closest personally to those three. We’ve really got to get them a win because everything they’ve done, they deserve, they deserve it,” sophomore Irish center Nick Martin said.

In total, 33 seniors will be honored before the game Saturday in front of a crowd of more than 80,000, and the Irish want the seniors' final memory of playing at Notre Dame Stadium to be a victory.

“I think it would mean a lot, especially against a tough opponent like BYU on our home field. I think it’s going to mean a lot to these guys, it’s always good to leave especially on a home field advantage to leave in front of a crowd as a winner,” sophomore Irish cornerback KeiVarae Russell said.

Kelly has not lost a game on senior day since he started coaching at Notre Dame nearly four years ago. A win this weekend over BYU will move him to a 4-0 record on senior day.